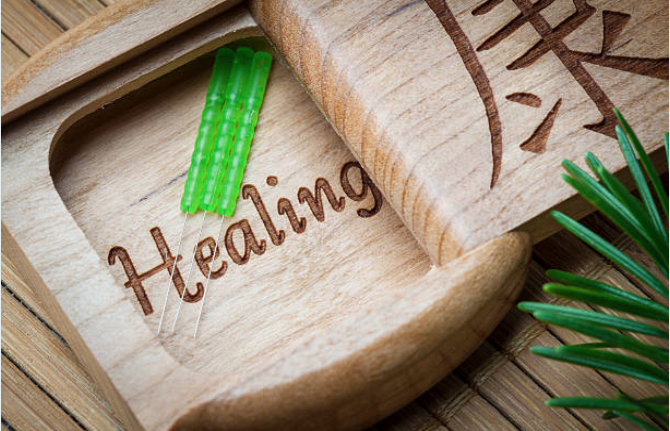 Acupuncture is a healing art that is believed to have originated in ancient China. The theory of acupuncture according to traditional Chinese medicine centers on the concept of qi energy (pronounced “chee”). According to this belief, our body’s life force depends on a balanced flow of qi (or blood, or electrical energy from the nervous system). Qi is said to flow through the body’s energy pathways, known as the meridians, which correlate to certain organs or groups of organs. The theory holds that qi can become blocked, which is what causes disease, pain or loss of function of various body parts. From this perspective, it is the acupuncturist’s job to remove blockages and restore the circulation of qi to heal the body.

Uses/Benefits: Common conditions that are treated by acupuncture include but are not limited to: inflammation, headaches, stiffness, pain, neck and back pain, dental pain, nausea, and stress or anxiety. Often, acupuncture therapy is used as complementary medicine. That is, it is used alongside modern medical treatments to help relieve symptoms, such as pain, nausea, fatigue, neuropathy, or depression or anxiety.

How it works: Acupuncturists shallowly insert very thin needles into specific points in the skin tissue, called acupoints. There are multiple systems of acupuncture, each of which has their own method of counting the acupoints, but most systems catalog about 350-400 such points.

The examination: Each practitioner has their own unique style. To determine which type of treatment will suit you best, your practitioner will first ask you about your symptoms, behaviors, and lifestyle. They may also closely examine: the shape, coating, and color of your tongue; the color of your face, and; the strength, rhythm and quality of the pulse in your wrist.

The procedure: Acupuncture needles are inserted to various depths at the strategic acupoints of your body. The needles are very thin, so insertion usually causes little discomfort, if any. Between 5 and 20 needles are used in a typical treatment. You may feel a mild aching sensation when a needle reaches the correct depth. Your practitioner may gently move or twirl the needles after placement, or apply heat or mild electrical pulses to the needles. In most cases, the needles remain in place for 10-20 minutes while you lie still and relax. Everyone responds differently to acupuncture. Some people feel relaxed after treatment, and others feel more energized. A common treatment plan for a single complaint typically involves one or two treatments a week, with the number of total treatments depending on the condition and its severity.